Linspiration: What the Lakers’ new point guard teaches us about overcoming obstacles

Linspiration: What the Lakers’ new point guard teaches us about overcoming obstacles

As a pastor and an avid basketball fan, I have been fascinated by Jeremy Lin’s story of faith and perseverance. Now that he is playing for my favorite team, the Lakers, I like the guy even more. But it’s easy to look at a person like Jeremy Lin—who always seems to have a smile on his face, a positive attitude, and has the privilege of playing ball for one of the greatest franchises in the NBA—and think that the road has always been a smooth one. 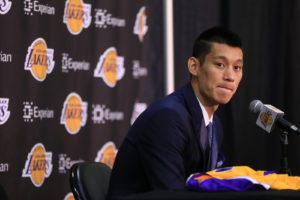 Lin endured a series of disappointments and setbacks prior to becoming the most talked about basketball star during the 2011-2012 season. Upon graduating high school, Lin hadn’t received a single athletic scholarship offer and was rejected by his first-choice school, Stanford University. After six months of prayer, he decided to enroll at Harvard, but he was not selected in 2010 NBA draft after graduation.

It was then that Donnie Nelson, the president of basketball operations for the Dallas Mavericks, called him and reminded him that God had a perfect plan for him. “This could be just…another barrier that you have to overcome, but God is sovereign,” Nelson told him. Lin played in the Summer League at Nelson’s invitation and received offers to play on multiple teams including the Mavericks, Los Angeles Lakers, and Golden State Warriors.

He chose to sign with the Warriors, which was his favorite team growing up and located in his hometown of Palo Alto. But Lin was released after a year without getting very many of those all-important minutes on the game clock to demonstrate his ball handling skills. He went on to the Houston Rockets who waived him less than a month later. The New York Knicks claimed him off waivers in December 2011. Knicks’ coach, Mike D’Antoni, finally gave Lin a chance to play early the next year because the team was not doing so well. During a game against the New Jersey Nets on February 4, 2012, Lin reached careers highs and teammate and superstar Carmelo Anthony suggested to Coach D’Antoni that Lin play more in the second half. According to a Christian Post article published that same month:

“Lin surprised everyone and became an overnight sensation when he helped secure seven consecutive wins for the Knicks. He was also the first NBA player to score at least 20 points and seven assists in each of his first four starts.

“‘There were just so many different things that really had to happen in order for me to make it into the NBA, and you know I have a list of about twelve to fifteen things that had to happen; none of it had anything to do with me, and it was all in God’s control. His fingerprints are all over my story,’ Lin said.

…His humility on and off the court, hard work ethic, and praises to God every chance he gets have sparked an overwhelming fan base and the subsequent ‘Linsanity’ movement, which many hope is here to stay.” 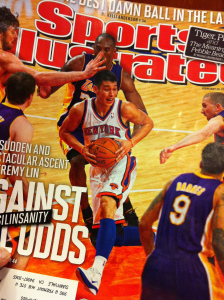 Lin has shared that one of his favorite Bible verses is Romans 5:3-5, which reads: “Not only so, but we also glory in our sufferings, because we know that suffering produces perseverance; perseverance, character; and character, hope. And hope does not put us to shame, because God’s love has been poured out into our hearts through the Holy Spirit, who has been given to us.”

To know—to be fully convinced of something in one’s mind—is powerful because it can motivate a person to accomplish the impossible despite hardship. The Wright brothers and other aviation pioneers were convinced that it was possible for men to fly. As a result, the airplane exists today, enabling us to soar to great heights and travel across the world in less than a day.

When I was writing my book, Walls Fall Down: 7 Steps from the Battle of Jericho to Overcome Any Challenge, I couldn’t help but share Lin’s story. Just like this inspiring young NBA player, Joshua and the Israelites were able to persevere because they were convinced that God’s promises were true. The Lord had said to Joshua,

“See, I have delivered Jericho into your hands, along with its king and its fighting men. March around the city once with all the armed men. Do this for six days. Have seven priests carry trumpets of rams’ horns in front of the ark. On the seventh day, march around the city seven times, with the priests blowing the trumpets. When you hear them sound a long blast on the trumpets, have the whole army give a loud shout; then the wall of the city will collapse and the army will go up, everyone straight in.” (Joshua 6:2-5)

Because of this promise, the Israelites knew that the tiring and monotonous work of walking around a heavily fortified city would result in victory. Similarly, you and I must be fully convinced of God’s promises and His desire to lead us to triumph in any situation we are facing. Having a razor-sharp dedication to a singular goal produces consistency. Consistency leads to victory, and victory begins in the mind.

Consider this: All of the people you admire went through some kind of adversity—poverty, abuse, imprisonment for what they believed, doubt in their ability to achieve their goals, setbacks, flaky friends, discouragement.

Consider this: All of the people you admire went through some kind of adversity—poverty, abuse, imprisonment for what they believed, doubt in their ability to achieve their goals, setbacks, flaky friends, discouragement. With every awe-inspiring biography or autobiography you read, you find out what makes these extraordinary people different from every other person who has endured the same kinds of hardship. It’s a steadfast determination and unwavering mindset that they were going to change their situation, pursue their goal, and achieve it.

Choosing to focus on and believe in your success instead of succumbing to doubt and discouragement is a constant battle we all face. James 1:6b-8 says this: “…he who doubts is like a wave of the sea, blown and tossed by the wind. That man should not think he will receive anything from the Lord; he is a double-minded man, unstable in all he does.” This verse comes in the midst of James talking specifically about persevering under trial and receiving wisdom in the midst of those trials. I believe the apostle hits on single-mindedness in this specific context because of its impact on our perseverance. Having a singular, laser-like focus on a goal helps people maintain consistency. But a person with a mixed up mentality is like a man trying to run both north and south at the same time. He will only be in conflict with himself and end up going nowhere.

Jeremy Lin’s journey to the Lakers is a reflection of his commitment to his basketball dreams and honoring God throughout the ups and downs of life. I love what he shared during an interview with GoodTV, a Taiwanese evangelical Christian channel, when he said, “The Bible talks a lot about how God takes bad situations…and He teaches us, and He uses those times of suffering to draw us closer to Him. And that’s what I try to focus on during those times. For me, when I get knocked down, I really try to get back up and go at it again. I don’t like to give up.”

Adapted from an excerpt of the book, Walls Fall Down by Dudley Rutherford.