What Our Trials Have in Common with Christmas Morning

What Our Trials Have in Common with Christmas Morning

Is there anything purer and more joyous than Christmas morning through the eyes of a small child? Do you remember what that was like? To be in your pajamas and wake up earlier than your parents and the rest of creation, tiptoe over the to a grand and glorious Christmas tree, and realize there is a present or a pile of presents nestled beneath the branches where there was nothing before. You recognize your name written on the shiny wrapping of one of the gifts and you pick up the box. What could it be?

Soon the rest of your family enters the room sleepily, and your mom or dad gives you the nod that means it’s okay to open your present. You eagerly tear open the wrapping paper and find that it had been concealing the very thing you wanted! The fast racecar or the new doll or the video game everyone has been talking about. For a child, the best part of Christmas morning is the surprise. 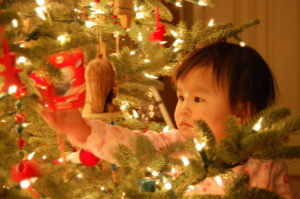 But as you get older, you want the surprise much sooner. You start looking for presents in every closet in the house in the days leading up to Christmas. And when you finally find one and extract it from its hiding nook, you shake the gift to determine its weight. Maybe you feel around the package or tear the wrapping carefully to peek at what’s inside. But once you’ve done that, the surprise is lost. Christmas morning loses a bit of joy when you know exactly what you’re getting.

Buried within your current struggle or trial are seeds of truth that, when fully sprouted, are God’s gift to you. It might be the precious necessity of learning patience or perseverance; it might be victory or some type of reward, be it spiritual or physical. Don’t attempt to receive the gift He has for you before it’s your time to receive it. Simply be obedient today, trust the Lord, and wait patiently to open the gift until He gives you that nod that lets you know the time is right. In doing so, you will not only please your Father in heaven, but also learn the lesson God wants you to learn—and this is actually part of the gift.

God had a special gift in store for His people at the battle of Jericho. It was wrapped in seemingly unbreakable walls and iron gates. And like a Russian nesting doll, it actually contained more gifts, larger gifts—riches, abundance of land and agriculture, and a gateway to other cities that would be theirs for the taking. But the Israelites had to be patient and obey God’s instructions to a tee before any of these blessings would be realized.

Joshua conveyed God’s command to the army by saying in Joshua 6:10, “Do not give a war cry, do not raise your voices, do not say a word until the day I tell you to shout. Then shout!” (emphasis added).

The word until is an important preposition in the English language. It denotes our need to wait, and to submit to the leading and timing of someone or something else. From the time of our youth, we have learned that we cannot get dessert until we eat our dinner, and that we can’t go out and play until our room in clean or we finish our homework. We start a career knowing that we won’t get a paycheck until we complete two weeks of work. A woman doesn’t give birth until she has carried her baby for approximately nine months.

In the battle of Jericho, the Israelites had to do exactly as God said and wait until the time was right. So do we. We cannot open God’s gift a second sooner. Like Joshua and the Israelites, we first have to submit to God’s leading and timing, and then we can learn what He is attempting to teach us. We can either do things our own way—which seems easy but is actually the hard way—or we can do things God’s way, which seems hard but actually is the easy way. There is no better plan than the one our heavenly Father has established. There is no better lesson than the one He desires to teach us. And the men and women who are patient, obedient, trusting, and eager to learn are the people who get the privilege of experiencing extraordinary triumph in their lives.

Did you know that Laura Ingalls Wilder, the renowned author of the Little House on the Prairie books, was unpublished as an author of books until she was sixty-five years old? Talk about waiting a long time to achieve “success” by the world’s standards! And yet, here’s the interesting thing: Even though it took her a long time to realize her dream of being an author, her works have already lasted long after she passed away in 1957.[1]

Ronald Reagan was a month shy of his seventieth birthday when he realized his dream of becoming the president of the United States.[2] To date, he is the oldest man elected to the office of the president. David Seidler, who wrote the script for the 2010 Academy Award-winning film, The King’s Speech based on the inspiring true story of King George VI, struggled in Hollywood for thirty-three years. At the age of seventy-three, he won an Academy Award for best original screenplay.[3] Abraham was one hundred years old and his wife Sarah was ninety years old when the Lord fulfilled His promise to give them a child of their own, from whom a great nation would grow one day (Genesis 21:1-7). And Moses was eighty years old when God called him to lead the Israelites out of Egypt (Exodus 7:7).

In these extraordinary examples, each of these men and women embraced the gift of learning something important and valuable during the long waiting period that would prepare them for their season of victory. It’s the same for you and me. We must have the attitude of Moses when he made this humble request to the Lord: “Teach me your ways so I may know you and continue to find favor with you” (Exodus 33:13). Treasure the learning process.

Excerted from the book Walls Fall Down, by Pastor Dudley Rutherford. Published by Thomas Nelson 2014.