After the credits roll: Louis Zamperini’s incredible story of redemption

After the credits roll: Louis Zamperini’s incredible story of redemption

What would you do in the midst of a dark and hopeless situation with no rescue in sight? How would you respond if oppressive forces did everything in their power to knock you down and break your spirit? Would you remain unbroken?

Last night I had the privilege of seeing an advanced screening of Unbroken, the incredible story of Louis Zamperini. The movie opens on Christmas Day and is adapted from Laura Hillenbrand’s bestselling novel, which I thoroughly enjoyed reading. When I was writing my book Walls Fall Down earlier this year about overcoming impossible obstacles like Joshua and the Israelites did at the battle of Jericho, I just had to share Louis Zamperini’s story. And when I heard a movie was being produced, I was so thrilled that even more people would become aware of his message of hope, faith, and redemption. 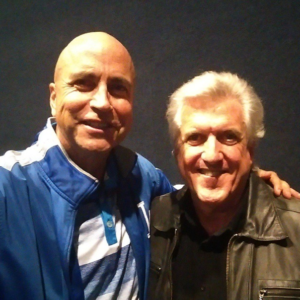 [PHOTO: Louis Zamperini’s son, Luke, and I at the screening of Unbroken.]

In case you are not familiar with his story, Louis Zamperini was an Olympic distance runner and a lieutenant in World War II whose plane crashed 800 miles south of Hawaii in the middle of the Pacific Ocean in 1943. Perched on a raft with only two other survivors of the eleven people who had been on the doomed B-24, Louis was pushed to the limits of his will and resolve. He and his companions fought off sharks, survived thirst and starvation, and miraculously remained unscathed after enduring forty-five minutes of machine-gun fire by a Japanese bomber.

As they drifted for thousands of miles with no rescue in sight, God gave them glimmers of hope. One day they found a few chocolate bars in the pockets of the raft. When their bodies had become gaunt from near-fatal dehydration, merciful rain showers poured down water for them to drink. An albatross landed on Louis’s head, and he reached up slowly and caught it. The men feasted on the seabird like kings and then used its bones to fashion claws to catch the occasional fish that swam just beneath the surface of the water. Seeing the stars strewn across the night sky reminded Louis that God was still there.

“When you reach the end of your rope and there’s nowhere else to turn . . . you’re going to look up,” Louis said later. He promised the Lord that if He got him through this, he would serve Him for the rest of his life.

After 33 days at sea, crew member Francis McNamara died. On day 47, Louis Zamperini and fellow survivor Russell Allen Phillips were picked up by Japanese sailors. They were held in prison camps for more than two years where they were tortured viciously, injected with strange substances, and deprived of food. Somehow, the defiant American with an unbreakable spirit survived. When the Japanese surrendered and the war ended in 1945, Louis was released and reunited with his family.

The Rest of the Story

This is where the film ends, although a series of end cards explains how Louis suffered from post-traumatic stress disorder and became an alcoholic but eventually made good on his promise to serve the Lord. Unbroken is a powerful movie; there’s no doubt about it. I understand that to dive into the second half of Louis Zamperini’s life would have turned a two-hour film into a four-hour film, but to me, his faith in Jesus is what allowed the war hero to become truly unbroken despite the horrors he endured.

You see, back home in America, Louis received the Purple Heart and many other honors, but he suffered from severe PTSD, including haunting nightmares from his horrific experiences in Japan. He drank heavily to cope, and his marriage was crumbling. At the prompting of his wife, Louis attended a crusade in Los Angeles in 1949 where a young evangelist named Billy Graham shared the gospel. During the invitation, Louis remembered a prayer he had spoken on that little raft in the middle of the Pacific Ocean six years earlier, promising God, “If you save me, I will serve you forever.”

At the crusade, Louis stepped forward and gave his life to Christ and experienced a complete transformation. His marriage was restored and his nightmares never came back. One critic wrote, “I can’t understand how someone with severe PTSD could get over it in one night.” After hearing about the incredulous comment, Louis said with a laugh, “The fellow obviously doesn’t know his Bible. When you accept Christ, you become a new creation. Old things are gone.”

“When you accept Christ, you become a new creation. Old things are gone.”

Louis forgave and made peace with his captors and went on to become an inspirational speaker who boldly shared about faith and forgiveness. Only through faith in Jesus can a person’s life be changed in such a dramatic way as Louis Zamperini’s was. His story teaches us that even when we are in the midst of a terribly hopeless situation, we need to look up! God’s light may start as a small glimmer of hope, but it will grow brighter in time and overpower the darkness.

I’m reminded of the words Isaiah prophesied about Jesus: “The Spirit of the Sovereign Lord is on me, because the Lord has anointed me to proclaim good news to the poor. He has sent me to bind up the brokenhearted, to proclaim freedom for the captives and release from darkness for the prisoners…” Praise God there is always more to the story!